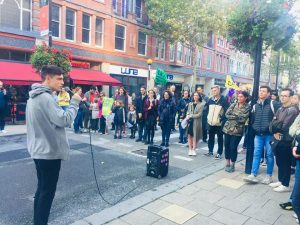 Speaking at the climate strike yesterday I made this one point:

Our young people are an inspiration.

This generation is growing up at a time when things feel tense and divided. When they look at the top offices of land, be it in America or the UK, the people with the most power are often acting with the least responsibility.

Presidents and Prime Ministers seem to get away with saying things that – if students said them in classrooms like mine – would receive detention or suspension.

Their supposed role models are setting the worst example.

And yet, the young people I meet in the climate movement, in my school, in youth centres and the wider community, it’s clear they are not copying this behaviour. They are not even just criticising it; they are forging a new and more positive leadership for themselves.

Greta Thunberg is so powerful not because she’s one individual, but because she reminds us of so many in this generation who are standing up and providing a new and better form of leadership.

Young people like Thomas Bowell who spoke movingly about environmentalism and disability rights yesterday, or Daniel Lukes who does so much to organise for Extinction Rebellion alongside others and Joseph O’Malley working on Labour for a Green New Deal. These are just some I’ve had the privilege to get to know this summer alone.

Young people like these have been a real inspiration and source of energy for me this summer. They are positive, determined and focussed on the things that really matter. They are respectful and radical, inclusive and strong, welcoming and clear.

At a time when politics can feel frustrating for all of us, these young people give us hope. They may not always be able to look up for meaningful leadership, but they are forging it for themselves. We should join them, and learn from their example.